Retrofit Kit – the story so far

Not so long ago our website reported a successful run of oil containers designed and produced by Saint Anns Sheet Metal. Read more about the oil container here. The oil container led to repeat orders and now continues to serve the customer at over 100 sites across the country. As always at Saint Anns, we are keen to make improvements particularly in the interest of saving money or becoming more environmentally friendly. On this occasion, we have been able to do both, with a retrofit kit.

The container originally had a simple cover for the main hatch containing waste oil. Supposing this container was to fall over, the cover (unlike the rest of the unit) would not be capable of retaining the oil. This could lead to a very messy situation and potentially environmental damage. To resolve this our team were committed to finding an alternative for the client that didn’t involve a full remodelling of the unit, by creating a retrofit kit.

The process of designing, testing and producing the kit took roughly 5 weeks overall. The first tests were water tests. To ensure we see the potential risk at its worst, we use water because it is substantially thinner than oil (particularly waste oil). The first test shows the extent of the risk and how far we needed to go to resolve it. The second test was using a secondary plate and hatch unit that helped cover the main escaping areas and prevented the water from pressuring open small spaces. 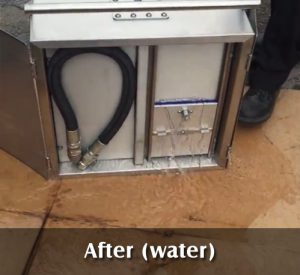 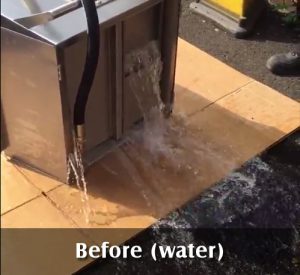 The early oil tests highlighted the risk further. The first adjustment halved the amount of escaping oil in one minute. On the final test, less than a litre of oil was spilled in a minute. Our final recommendation was to consider a fully welding the top of the unit to ensure no further spillage but  based on the relative cost savings and efficiency of the existing retrofit kit, it was deemed unnecessary. 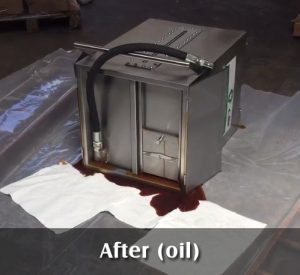 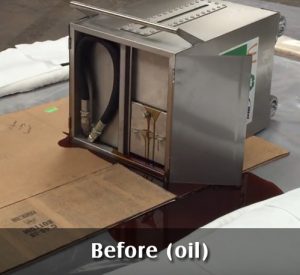 The final part of this process is to ensure every unit is upgraded. Overall the substantial saving to resolve this has been welcomed and we hope to continue to design improvements in future. The improvement was so effective from our tests that we have since embarked on a similar project and included this same feature from day one.